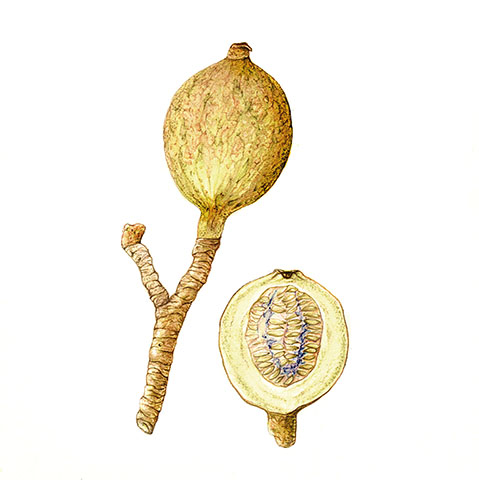 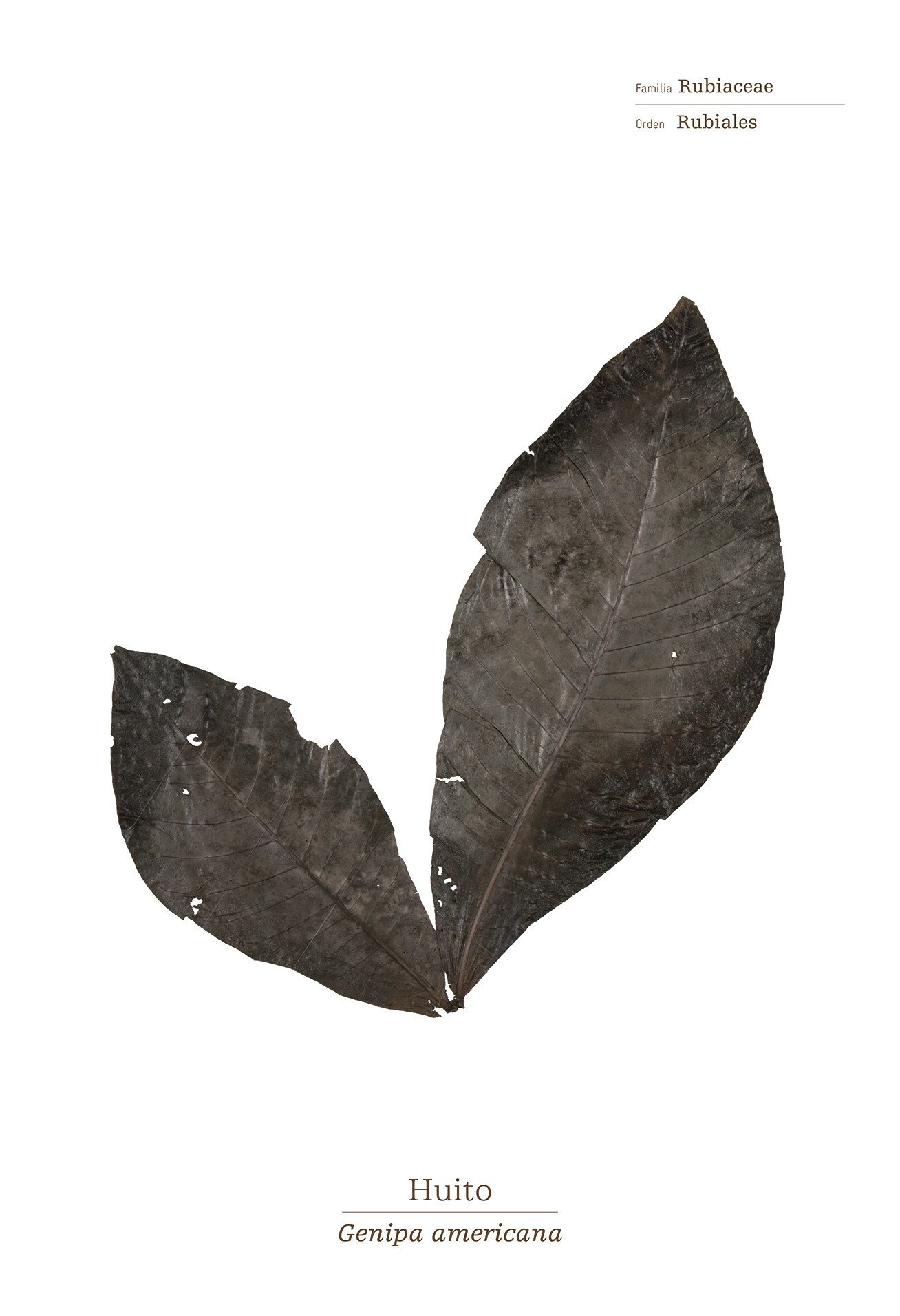 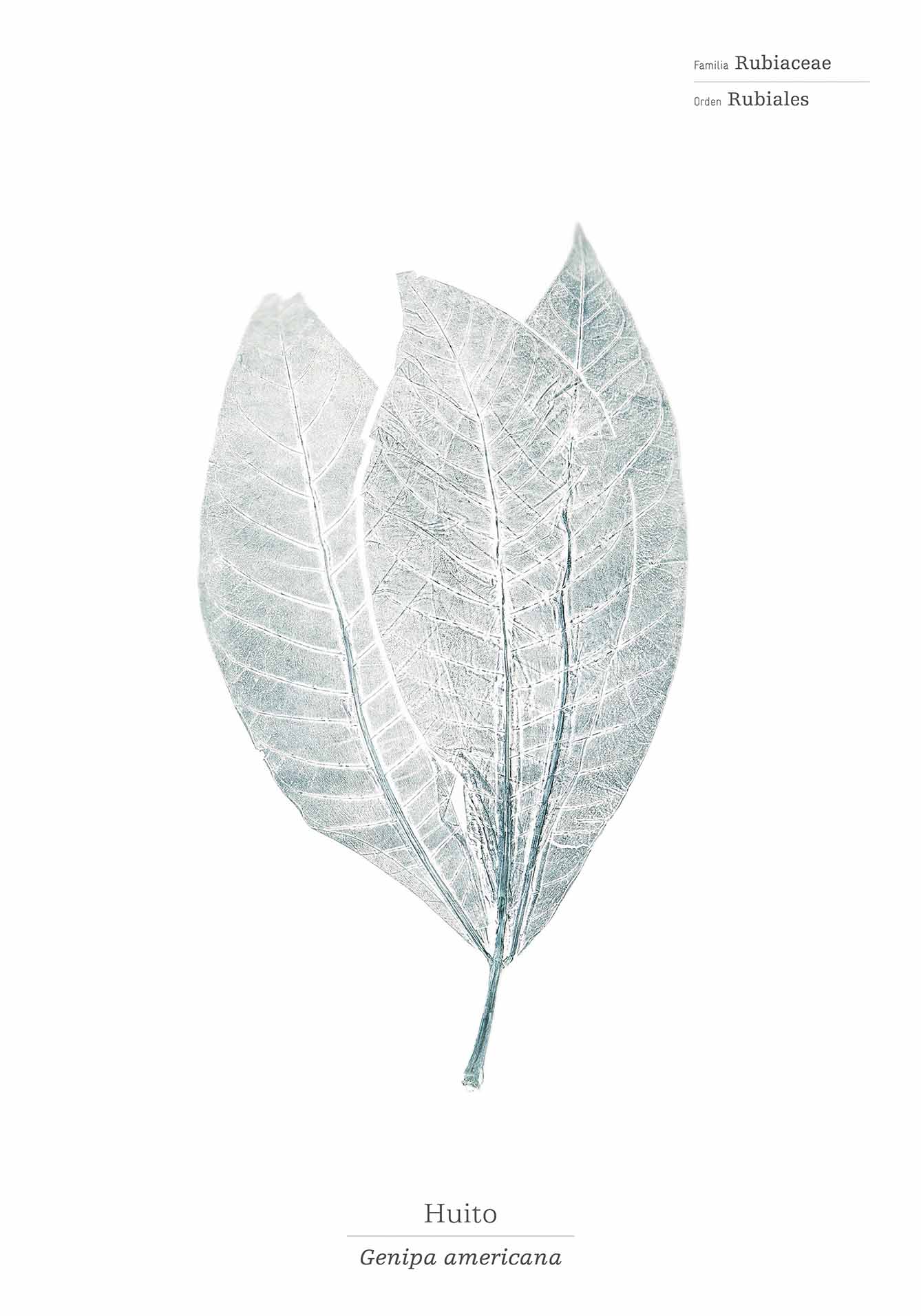 Tree growing up to thirty meters in height with a wide-spreading crown. The trunk is usually cylindrical and straight, the bark being smooth and gray with white spots. The leaves are elliptical and grouped at the end of the branches. Individual white to yellow flowers grown adjacent to the leaves. The round and fleshy fruit is medium-sized and brownish-gray in color.

It grows in warm and humid environments, up to 1,500 meters above sea level, in tropical forests and some subtropical areas of Central and South America, from Mexico and the Caribbean to Argentina. It is native to the Amazon basin, a region that harbors the world’s greatest diversity of species of the genus Genipa and where it can be found in the wild. Although its seeds are spread by birds and mammals, its extensive dispersal throughout tropical America is the result of human migration in prehistoric times.   The name huito comes from wituk, in the Kichwa language, an Amazonian variant of Quechua. It is also known as jagua, xagua, mayagua, bilito, guayatil, irayol, caruto, mandipa, genipap and jenipapo, among other names. 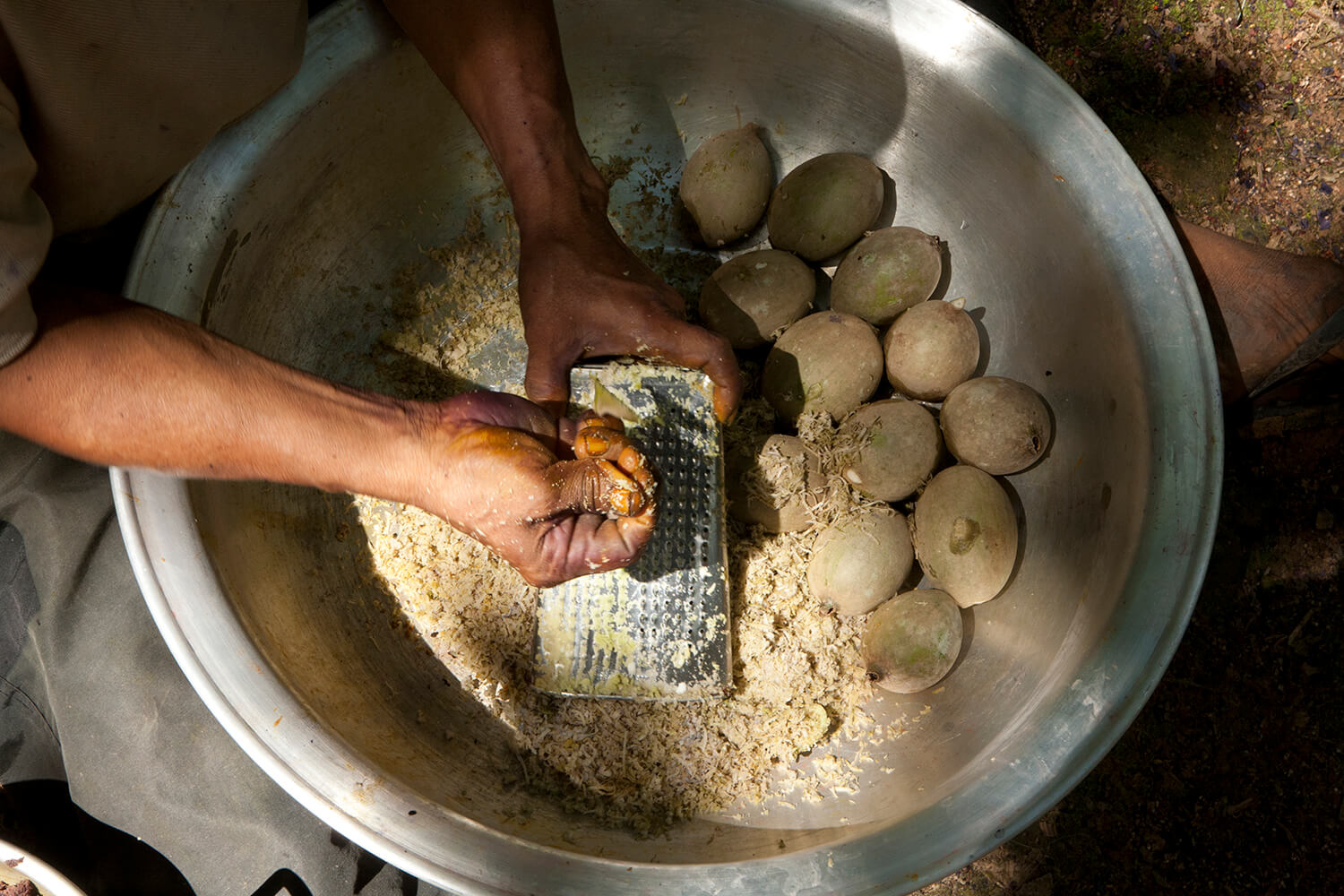 Preparation of the pigment with the huito seeds. Leticia, Colombia, 2011.

A brown juice is extracted from the pulp of the immature fruit, which gradually darkens on contact with the air until it turns dark blue, almost black. This juice contains high levels of iridoids, such as genipin, a chemical compound responsible for its pharmacological activity and its characteristic blue pigment. This pigment has been used as a body paint and natural dye since ancient times and, although it permanently stains the skin black, it only affects the outer layers of the epidermis, which is why it disappears in about two weeks, as the skin renews itself.   At the time of the arrival of the European colonists to America, the indigenous people mainly used huito to tattoo the body, as camouflage, and in rituals combining medicine, magic and religion. The indigenous Cunas, in Panama, call this extract saptur and use it in a magical-religious context “to envelop the patient in a dark cloud” so that evil spirits cannot find him. Some indigenous people paint the soles of their feet black, believing that it makes them invisible to snakes. In Amazonian myths that speak of the origin of plants, huito always appears in association with Bixa Orellana, achiote (annatto), also known as urucú, onoto, or bija.   The fruit and all the products of the plant are sold in the traditional markets of many cities in the Amazon region where it has been used ancestrally for many purposes. A fiber is obtained from the plant to make clothing and its wood is used to make small boats and handicrafts.   The ripe fruit was an important food source in ancient times. It is currently consumed in a limited way in rural areas. It contains minerals and other bioactive compounds that are beneficial to the human diet. It is rich in iron, vitamins B1, B2, B5 and C, and contains calcium and carbohydrates. It is used to make jams, sweets, ice cream and syrups, and is also macerated and fermented with sugar cane liquor to obtain an alcoholic distillate popular in Iquitos and the Peruvian Amazon.   All parts of the plant have medicinal activity. The bark of the stem and the root is cooked and prepared as a purgative, useful for the treatment of scurvy, venereal ulcers, granular pharyngitis and anemia; in addition to being used for the relief of bruises and sprains. An infusion of the leaves is used to treat diarrhea and syphilis; and the flowers are used by some native tribes as a tonic and fever-reducing agent.   It has the reputation of being the only natural substance useful for treating attacks by the candirú (Vandellia sp.), an extremely small fish that penetrates the orifices of the human body.   The juice of the immature fruit is used to heal wounds, as a sunscreen and antifungal agent, and in the treatment of scabies and skin infections, cataracts, blurred vision, vaginal infections, and uterine cancer. It has prophylactic properties against malaria because it repels insects. It is also bactericidal and germicidal. Due to its astringent, anti-inflammatory, antibiotic, diuretic and purgative properties, it is used in indigenous medicine to treat respiratory disorders, anemia, stomach problems, nervousness, as well as being an excellent tonic in the fight against indisposition, fatigue and weakness. The ripe fruit is used against asthma, jaundice, liver diseases, osteoporosis, diabetes and high cholesterol. Due to its high mannitol content, it is recommended for the treatment of hypertension. In addition, the oil from its seeds has broad-spectrum antimicrobial and anti-inhibitory properties of the enzyme acetylcholinesterase, which is related to Alzheimer’s.   Currently, it is one of the most used natural dyes in the textile, cosmetic and food industry.

Huito provides a grayish-indigo, extracted by grating its fruit. The color obtained from the huito properly adheres to cotton and paper, but this is not the case with fique (natural fiber). The pigment dissolves in water or alcohol; the latter allowing the creation of a more intense indigo.