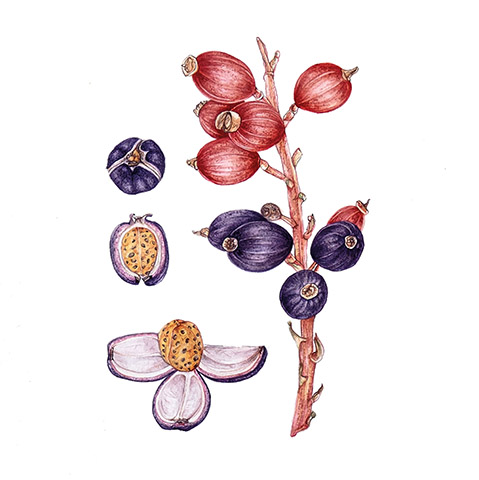 Cooking process and dyeing of natural fibers with huitillo pigment. 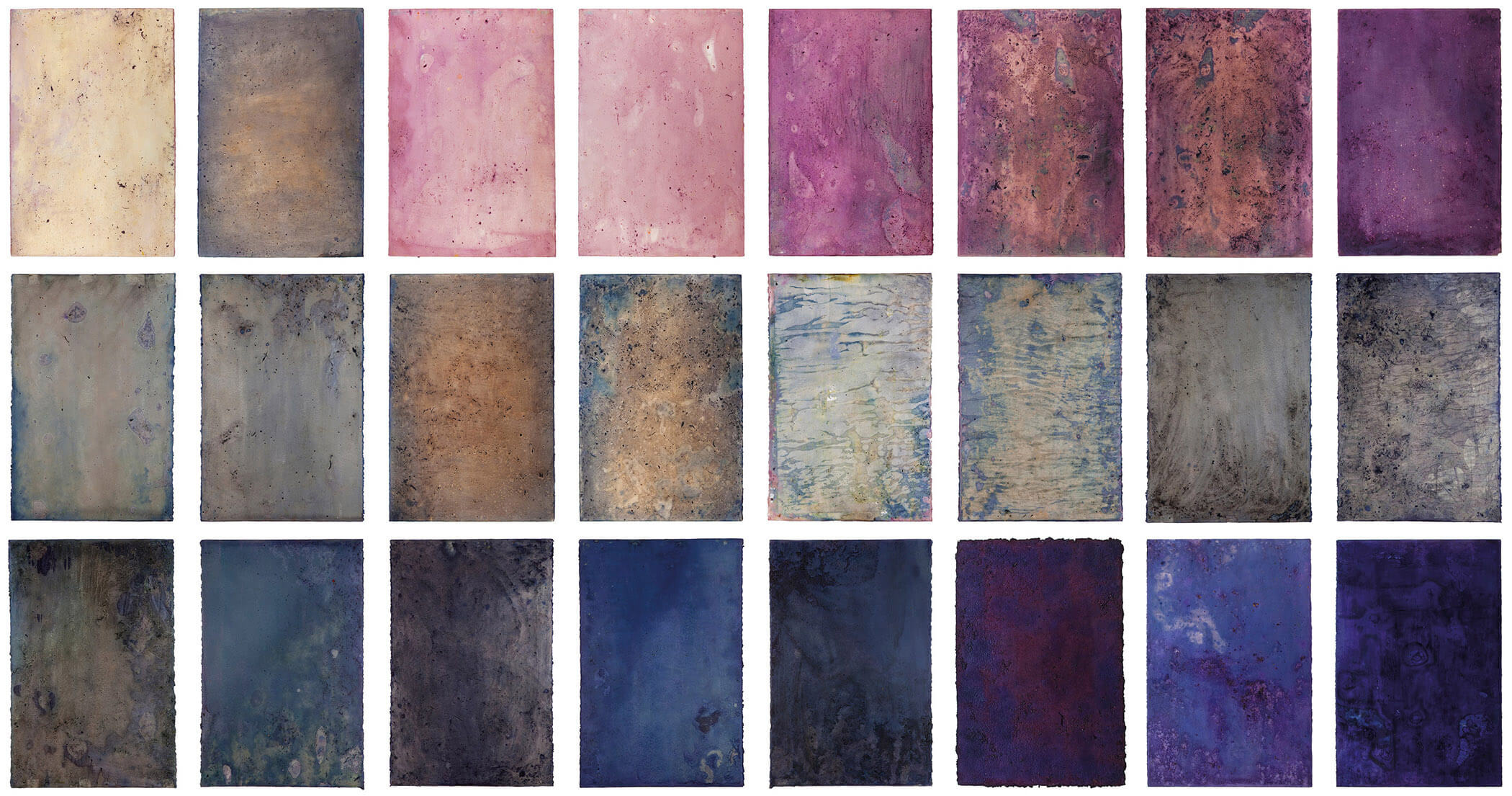 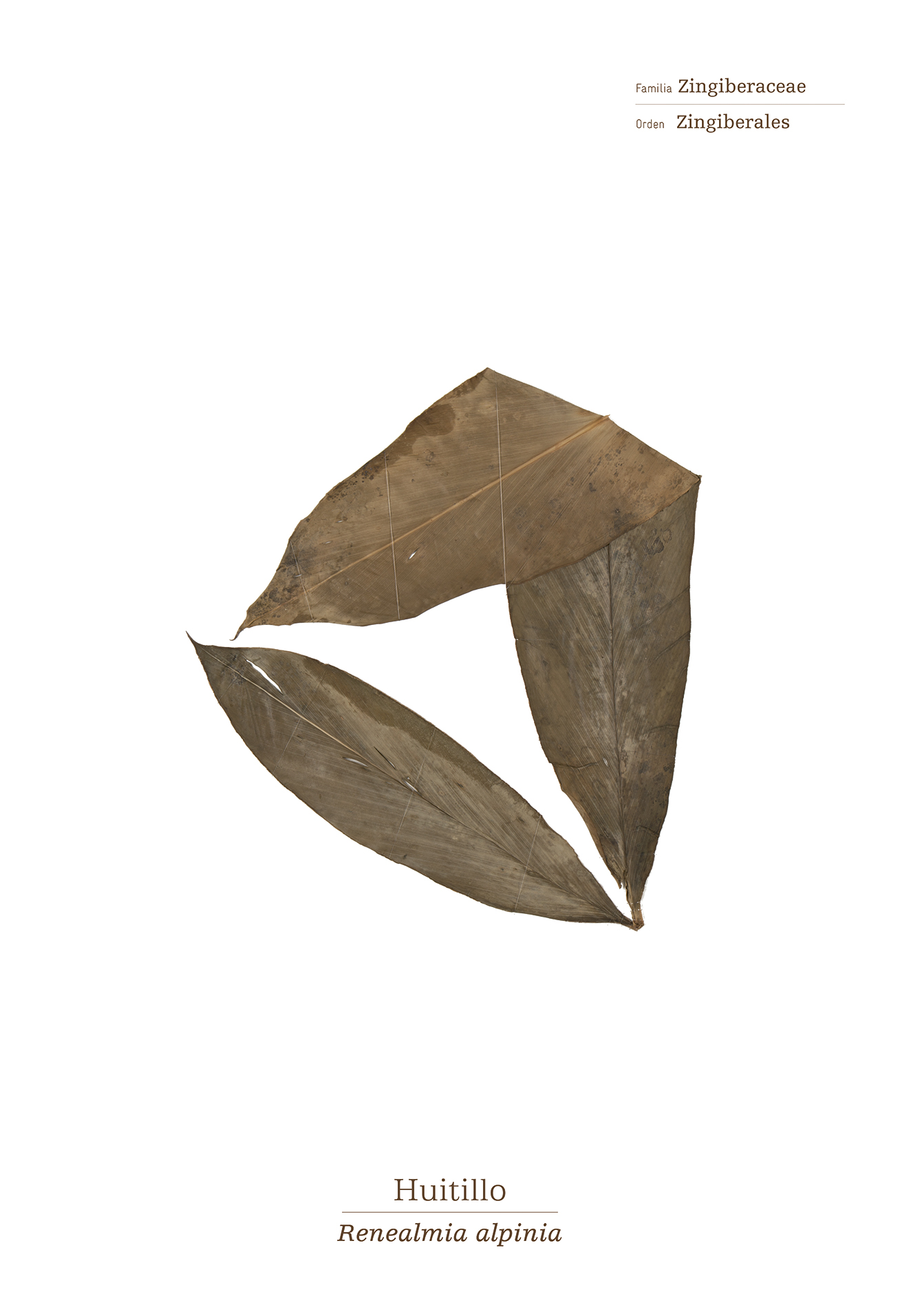 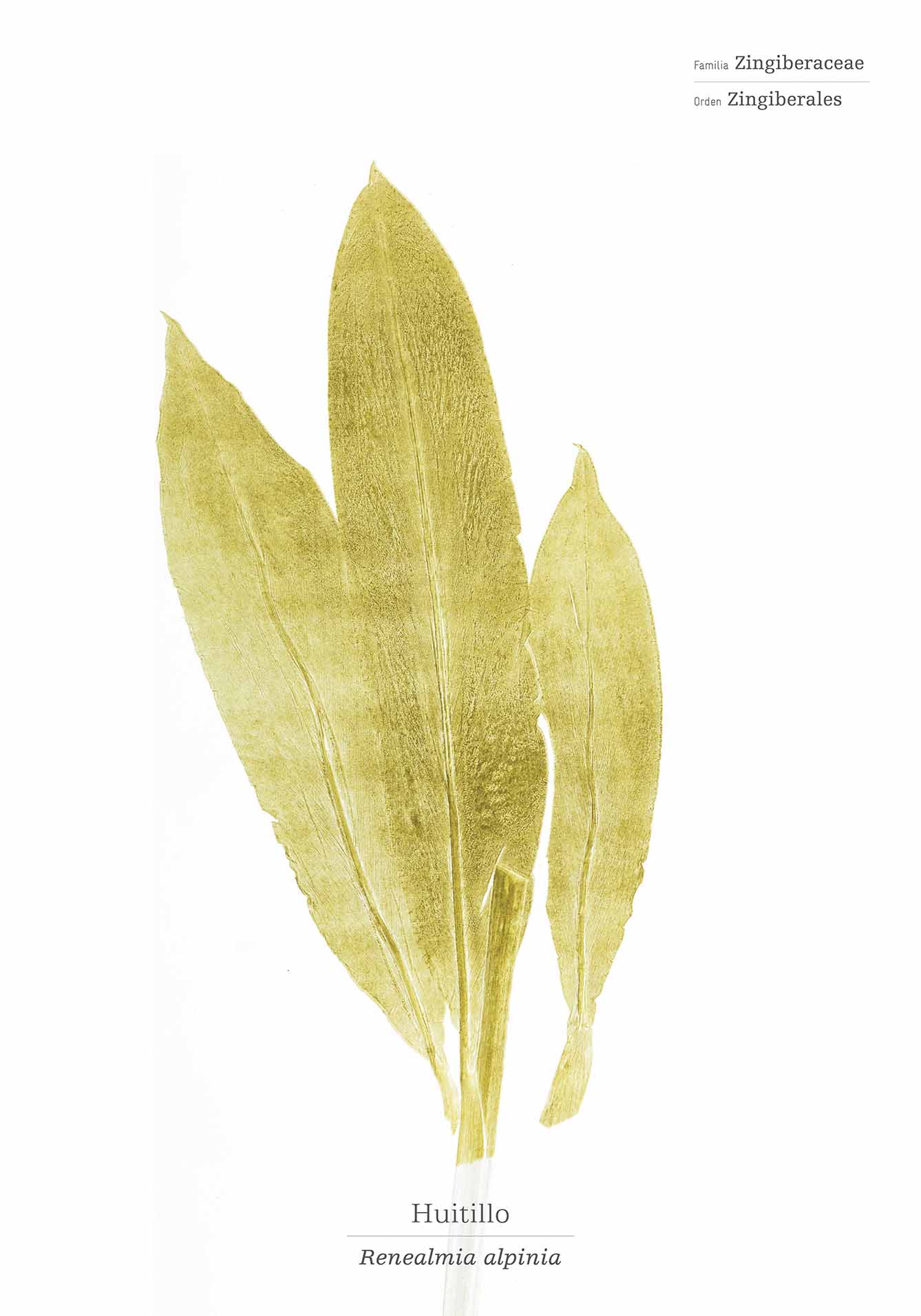 Aromatic herbaceous plant that grows to between two and six meters in height. Its elongated and elliptical leaves are up to one meter long and eighteen centimeters wide, and they emerge directly from the stems. The reddish-yellow flowers are grouped in a cluster in the lower part of the plant; the fruits are elliptical in shape, reddish to dark purple when ripe, and have numerous seeds embedded in a yellow pulp. It is a rhizomatous plant, that is, it has an underground stem—known as a rhizome—with multiple buds; these grow horizontally, creating roots and nodes that provide a nutrient reserve. It belongs to the Zingiberaceae family, which is characterized by the number of species of great pharmacological and nutritional importance, and is a neotropical relative of ginger, turmeric and cardamom.

The Renealmia genus is distributed throughout the tropical region of America and Africa with approximately 82 species, of these, 62 are found in the tropics of the Americas.   The species Renealmia alpinia is widely distributed from Mexico to Peru and Brazil through the Lesser Antilles, French Guiana, Guyana, Suriname and Venezuela. In Colombia it is found in the departments of Antioquia, Chocó, Caquetá, Putumayo, Guaviare and Amazonas, and in the Llanos Orientales. It grows between 50 and 1,500 meters above sea level, and is typical plant found in lowland tropical rainforests and sub-Andean forests, which blooms for long periods and bears fruit during the rainy season.   It was first discovered in 1755, in Suriname, by the Swedish explorer and naturalist Daniel Rolander, one of the “seventeen apostles” of Carl von Linnaeus.   It is known as huitillo, guaiporé, pintura negra, matandrea, jazmín de monte and achira de monte in the Amazon; murusi in the Orinoco; kumpia in Ecuador; mishquipanga in Peru; and x’kijit or ixquihit in Mexico and Guatemala.

Macerating the shell of the huitillo fruit. 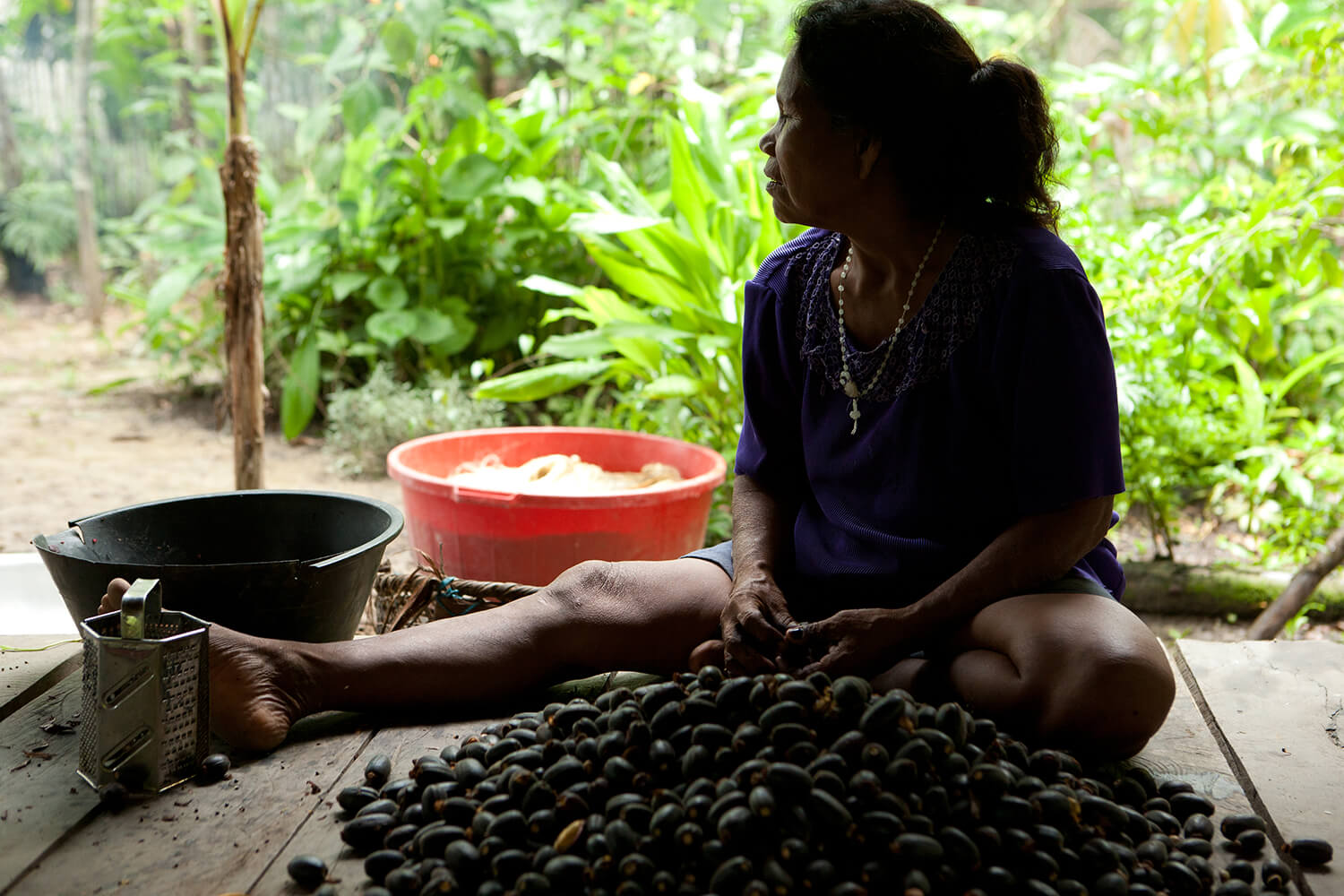 One of the steps in the manual color extraction process. Leticia, Colombia, 2011.

In appearance it is similar to the heliconias (Heliconia spp.). Numerous medicinal properties are attributed to the leaves, flowers and fruits, as well as to the roots. The immature fruit has a pearly red capsule that, when crushed, is used as an antipyretic and analgesic against the bite of the bullet ant (Paraponera clavata). The fruit also has a high nutritional and antioxidant content, and is harvested and consumed as an important food source by indigenous groups such as the Shuar in Ecuador and the Totonac in Mexico. From the exocarp (the outermost layer of the ripe fruit) a blue-purple dye is extracted that is widely used to dye chambira (palm fiber textiles) and other handicrafts. An oil is prepared from the seeds, used both for frying food and as a remedy against fever, nausea and vomiting.   Preparations from the rhizomes and leaves are used to counteract the symptoms of snake bites and scorpion stings in humans and dogs, bacterial infections that cause fever, gastrointestinal problems, and heart conditions manifesting as shortness of breath or chest colds. It is also used for anxiety and neurodegenerative disorders. The leaves are used to combat hypertension and cleanse the urinary tract, as well as being an effective agent for treating leishmaniasis. The Yanomami, in the Brazilian Amazon, use its stems to remedy headaches and general weakness.   A decoction of the stems, the whole plant and its roots is used to treat vaginal infections and relieve digestive ailments. It is widely used as an antipyretic and antiemetic for the treatment of wounds and malignant ulcers. In Suriname it is also used to treat epilepsy. It is effective against fungal infections. Cytotoxicity studies have shown that huitillo rhizomes have a significant and strong antiproliferative effect on tumor cells, indicating their potential as an anti-cancer agent.   The root, cooked and taken as a juice, is used to treat snake bites due to its anti-swelling, anti-hemorrhagic and neutralizing effects against venom. It has been traditionally used by the Emberá indigenous people to treat the bite of the fer-de-lance pit viper Bothrops asper in Antioquia and Chocó, Colombia. Its analgesic properties have also recently been discovered, providing relief of pain that occurs after a bite and offering a source of molecules with potential pharmaceutical use. In Suriname, the Maroon people in particular use preparations of the leaves or rhizomes, either alone or together with parts of other plants, as a blood purifying agent, to prevent infertility in women, to speed up labor, and to prevent uterine inflammation after giving birth.

The huitillo yields a purple color after macerating ripe fruit’s skin. This plant offers a wide spectrum of possibilities because it produces a high-yielding pigment that easily binds to the different surfaces used. Exposure to heat is indispensable during the setting process. An intense indigo blue is the result of using only the skin. If lemon is added, the color turns purple-fuchsia, and if the pigment is mixed with white clay, the result is a pastel purple. When a fair amount of alum stone is applied, the result is a purple-royal blue shade.

Cooking process and dyeing of natural fibers with huitillo pigment.