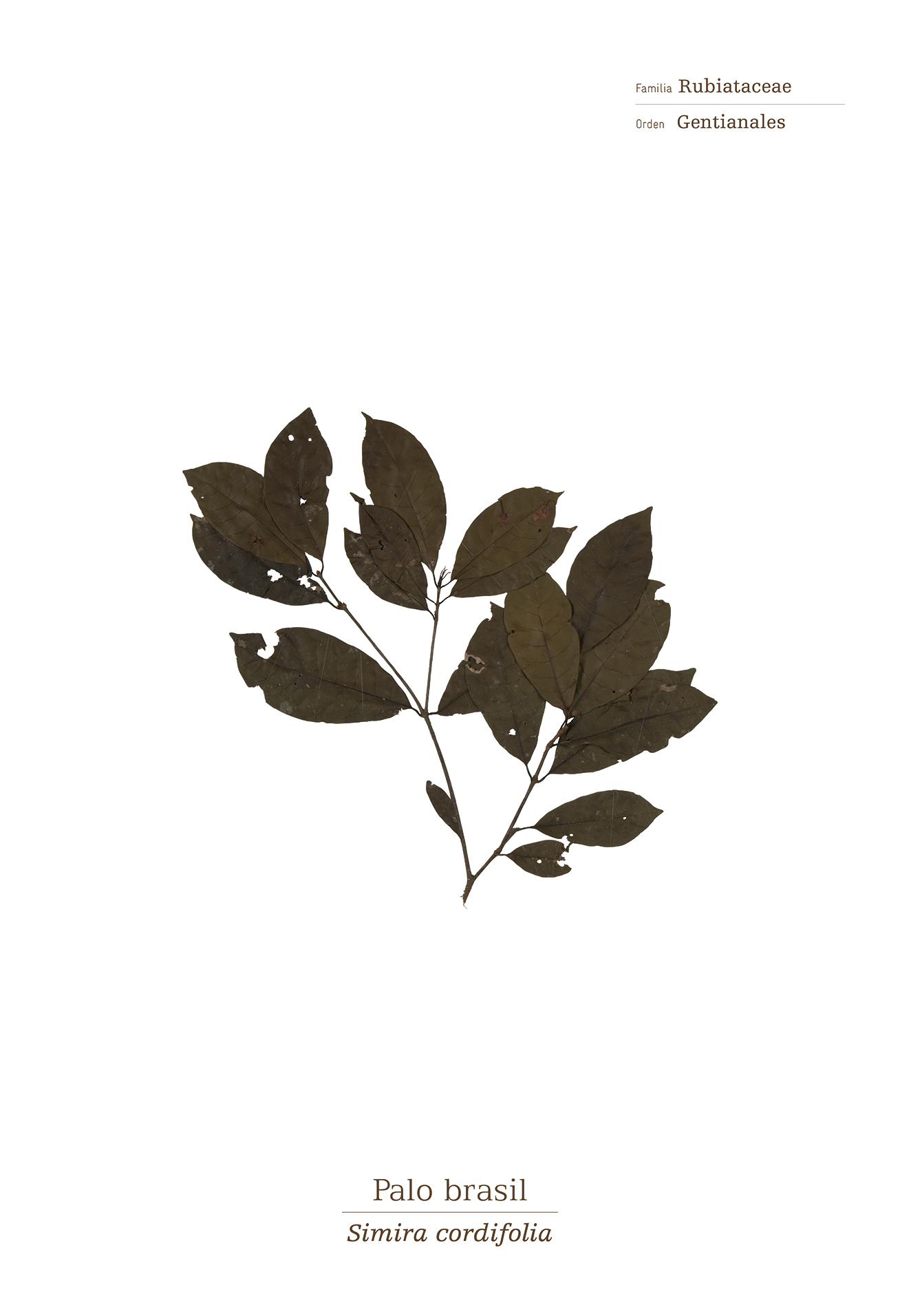 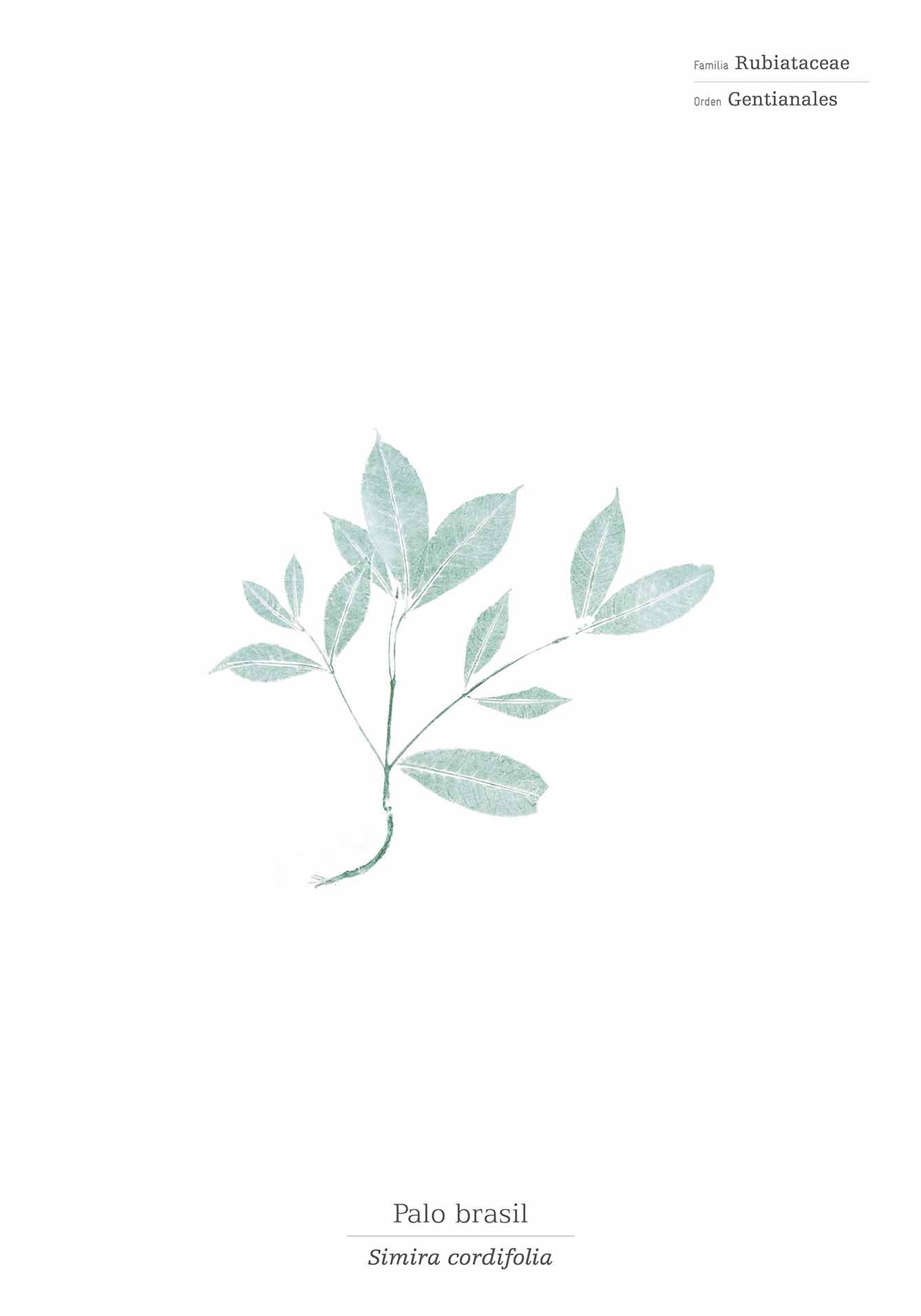 A large tree growing to at least twenty meters in height. It has a straight, smooth trunk, with branches that are located in the upper part of the tree. The leaves are oval and are grouped at the end of the branches, as are its flowers which are small and bell-shaped, with shades ranging from white to cream. Its fruits, opaque in color, are fleshy and round. A pale red liquid emerges from the bark which, after a few minutes of contact with the air, becomes more intense in color.

It is distributed across the South American tropics, from Colombia to Bolivia, and is native to the Amazon basin. It grows in hot climates, on humid and fertile soils, in primary forests located in the middle and lower parts of mountainous areas up to 750 meters above sea level. In Colombia it can be found in the Andes, the Amazon, the Orinoquía, the Serranía de la Macarena and the Caribbean plain.

Macerating the bark of the palo brasil. 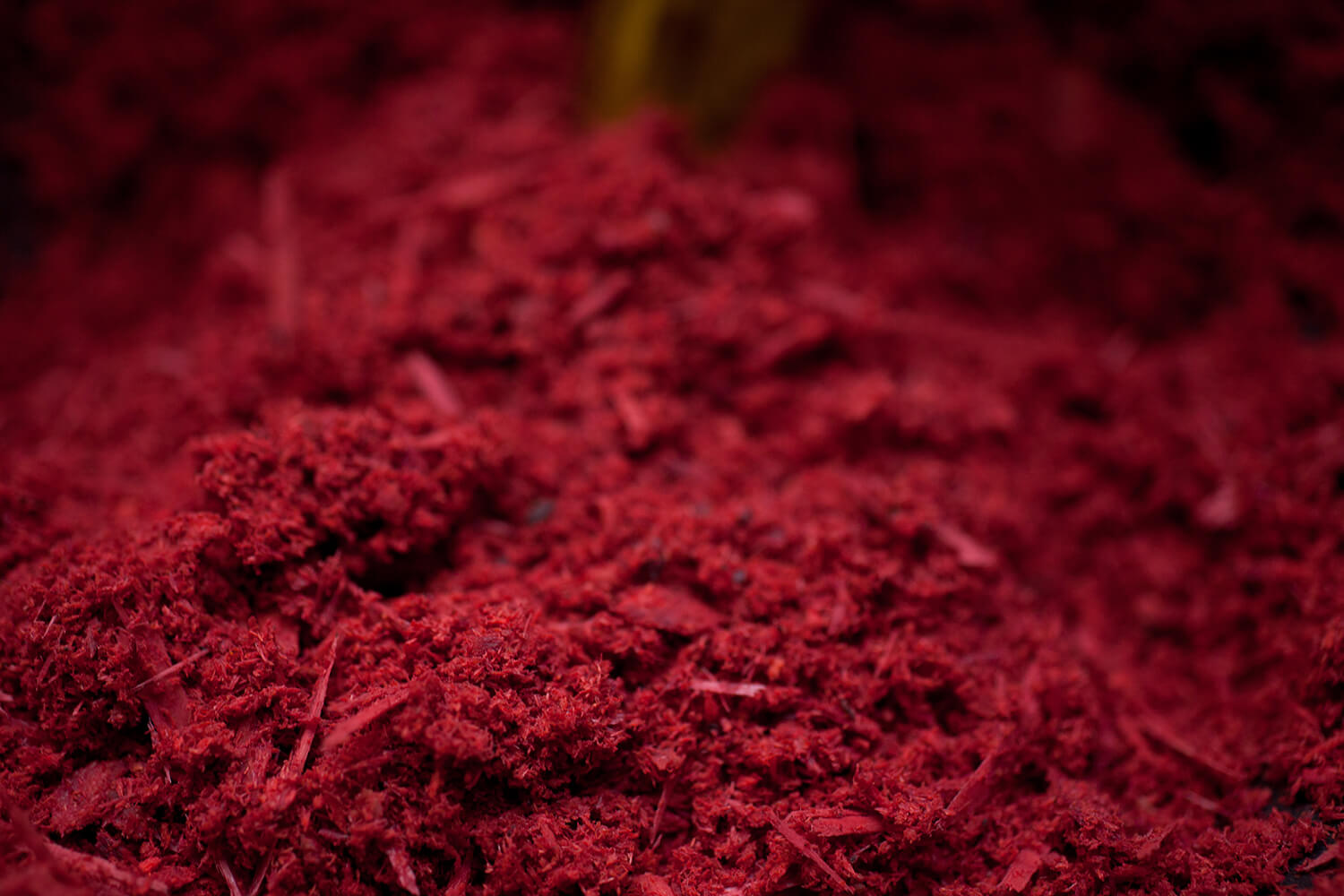 Color extraction process from the bark of the Palo brasil. Leticia, Colombia, 2011.

It is a tree highly appreciated for its wood, which is used in construction, to make furniture and other items, or as firewood; as a result it is a threatened species.   Its use is closely related to that of the similar species Simira rubescens, with which it shares geographic distribution, sometimes making it difficult to identify. Both are highly valued as dye species by different Amazonian indigenous communities of Colombia, Ecuador and Peru.   In the Colombian Amazon, the indigenous Tikuna extract a red dye from the bark of Simira cordifolia to stain the fiber of the chambira (Astrocaryum chambira). Similarly, in the Ecuadorian Amazon, Richard Evan Schultes found that the indigenous Boras, like the Huaorani, use the species Simira rubescens in the same way to obtain a red dye used in the manufacture of bags and hammocks. The Huaorani call this tree huepetahue, its bark huepeta or wepeta, and the red dye they extract from it huepei, which means “the color of blood.”   In the Lagartococha region, in the Ecuadorian Amazon, it is used medicinally for the treatment of erectile dysfunction, due to its vasodilator properties. It is also used to regulate menstruation.   In Loreto, Peru, it is known as puca quiro and its macerated flowers are used to relieve skin infections. The Taiwano, indigenous people from the middle basin of the Pirá-Paraná river, in the south of Vaupés, Colombia, also use the flowers in a similar manner.   It contains abundant alkaloids, steroids, triterpenoids and coumarins, which would explain its antipyretic, febrifugal and tuberculostatic properties, and confirms its great potential for medicinal use.

A range of pink and red tones is obtained after macerating the internal bark of this tree. palo brasil’s color sets well on paper, but not so well on cotton, on which it adheres only mildly. Long periods of exposure to fire are needed for it to set well on fique (natural fiber). Due to the nature of extraction —which requires cutting fragments of the bark of a scarce species—the tree was used as little as possible.